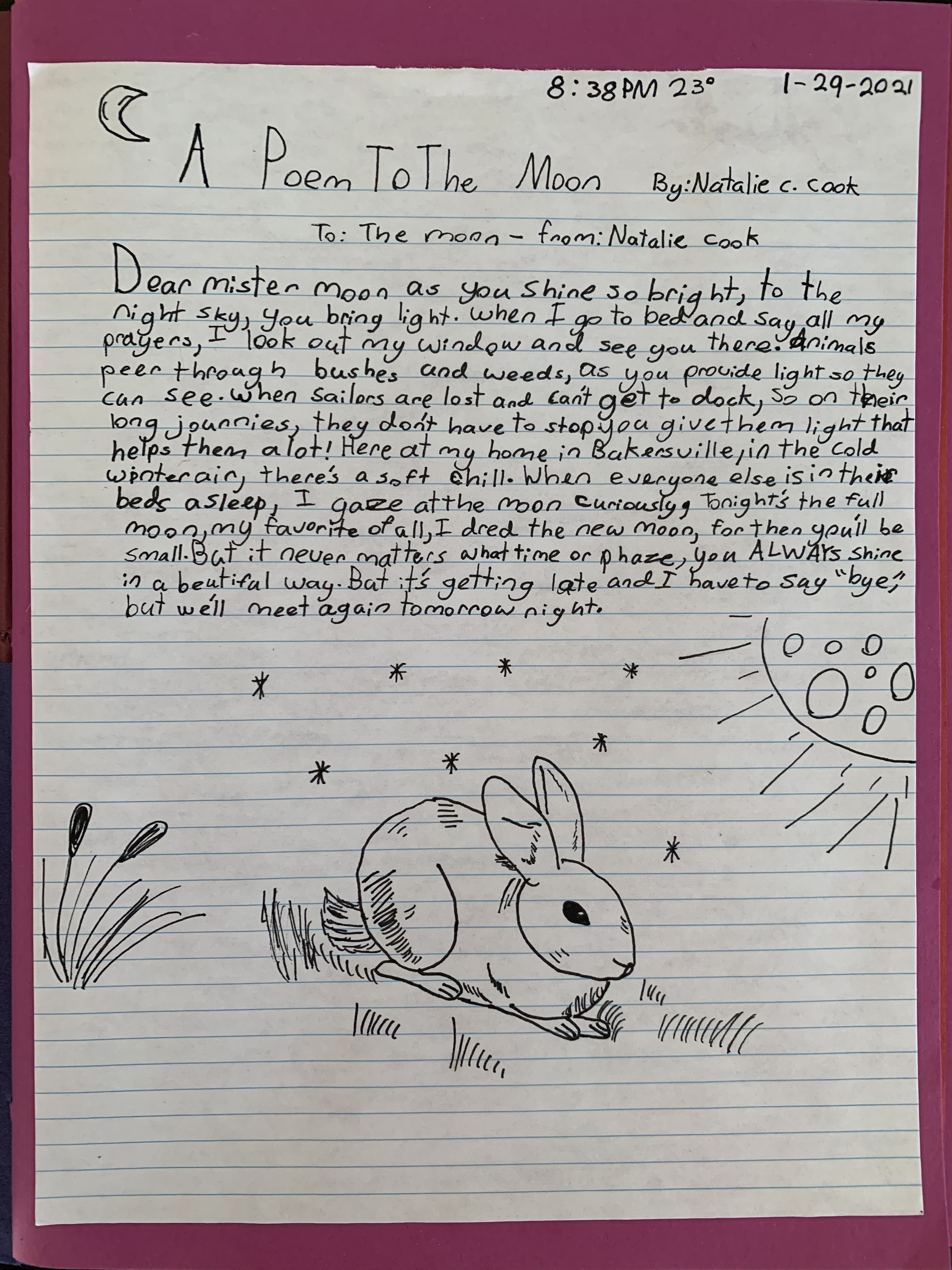 The moon journal project, which has been a staple of the third-grade curriculum in Mitchell County for 20 years, went virtual this year.

The teachers worked with Meg Peterson, a teaching artist at Penland School of Craft, to transform the hands-on project into a virtual one.

Peterson started the project more than 20 years ago when a teacher at the Spruce Pine Montessori School suggested it. After doing the project for a few years, Peterson and local teachers realized that the project tied in well with the third-grade curriculum.

“The kids are basically studying the moon and the night sky in third and fourth grade, but we feel really passionate about introducing the topic in third grade,” Peterson said. “It’s such a threshold year for kids figuring out how to formulate their own questions and come up with their own texts. They’re just learning how to write and this is a wonderful thing for them to hang their minds on so to speak.”

Under normal circumstances, Peterson would come to classrooms or students would travel up to Penland to create their own journals, but this year, they were sent packets filled with paper, glue, string and pencils.

“Meg and Penland were kind enough to pack up the materials and send it out to us because of the circumstances,” Lord said. “They aren’t able to use different materials and paints to create nighttime pictures like they usually would because it’s condensed down to the simple pages, but the kids can still be creative with it at home.”

Following along with a video tutorial Peterson put together, students used the materials in their packets to sew their own journals at home.

“The video about how to put the books together was really professionally done,” Stafford said. “It was super easy to follow for the kids and the parents.”

In addition to the materials to make the journals, the packets also included a thorough list of prompt ideas formulated by Peterson for kids to be inspired by. Prompts include “Concentrate on night sounds. Which ones are man-made and which ones are natural?” and “Write down the words of a moon song that you have heard. Illustrate it.”

“The goal of the project is just to get them out to draw, write, paint some observations of the night sky either at night or early in the morning,” Peterson said. “The point is to be awake and observing every night. The focus is nighttime more than daytime, so you’re not wrong if you’re doing it in the day, but now that we’re all attached to screens, kids are kind of removed from the nighttime world and the goal is for them to make friends with it.”

In addition to drawing or writing observations, students write down the weather, time, temperature and moon phase along with each entry.

The students have already filled out a few prompts in their moon journal and Peterson noted the creativity she has seen throughout the years.

“It’s incredible what some of these children come up with,” Peterson said. “You can’t underestimate the creativity of these kids, especially as they’re coming to understand how to write and the power of words and art.”

This year, the beginning of the Moon Journal project fell on two special dates: the first full moon of the year and the 100th day of virtual school.

Virtual school has been a major adaptation for teachers across the country, including Stafford and Lord, who are both teaching solely virtual classes.

“I know when we started out, I didn’t know the technology like I needed to,” Stafford said. “When the county office asked me to do this, I told them they had lost their minds...I’m the least capable person of learning new technology and if it hadn’t been for Michelle Lord, I would probably still be drowning.

“It kind of flipped us to where we had to learn something new and after the first nine weeks, I felt a whole lot better and it turned into something that’s been very productive.”

Both teachers said they haven’t just adapted, but have also learned new skills they will carry into the future.

“I’ve learned so many new skills that I didn’t know I could have,” Lord said. “I know that I will bring some of these skills back to face-to-face. I know we’ll be back there one day, I don’t know when, and I’ve learned so much that I think can enrich that setting.”

Lord added adapting to virtual school has been a challenge, but the students, parents and school administration have been helpful and forgiving.

“Our parents have been amazing, supportive, kind and patient as we’ve been figuring things out,” Lord said. “And I have to say, our county office has been supportive in just about everything we’ve wanted to do.”

“They supported us and they’ve trusted our professionalism and our knowledge of teaching,” Stafford added. “I’m proud of us.”

“I’m proud of both of you,” Peterson said to the two teachers with a grin. “It’s been great to watch them gain confidence.”