A SHOT OF HOPE: More than 300 vaccinated at first local pop-up clinic 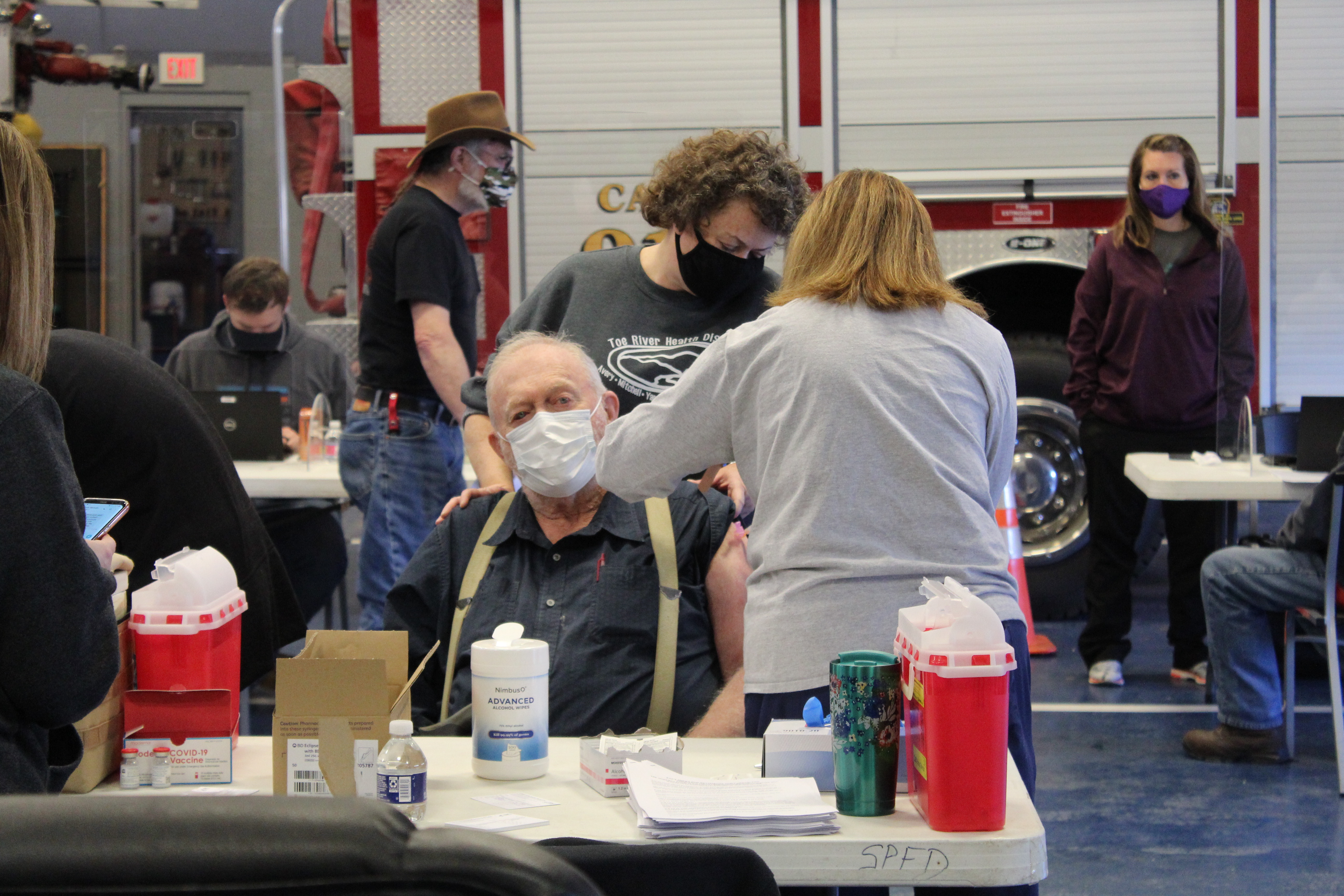 The Mitchell County Health Department held its first vaccination pop-up clinic on Thursday, Jan. 14 at the Spruce Pine Fire Department in an effort to speed up the vaccination rollout.

The clinic, which was held from 8:30 a.m. to 4 p.m., drew hundreds of local senior citizens aged 75 or older. By the end of the day, Nursing Supervisor Christy Duncan said they had vaccinated 350 people.

“I think these people are scared of this virus, so I think it’s important for them to get the vaccine to keep them safe from getting COVID,” Duncan said. “That’s why it was important to hold this and why there was such a big turnout because they want that level of protection, to protect them and their families.”

The pop-up clinic was a huge operation with approximately 40 volunteers, including volunteer firefighters and police. Duncan said everything came together in less than a week.

“We only had this planned in a few days, believe it or not,” Duncan said. “I mean, we’ve only had the vaccine for a few weeks, so once we saw how overwhelming the response was from the community to receive it, we realized we had to do something different than just appointments at the health department, because we wouldn’t be able to even put a dent in this numbers of people who are wanting to be vaccinated.”

The turnout to the clinic was huge, with traffic climbing up Burleson Hill by 8 a.m. before the clinic even opened. Local police and volunteer firefighters helped keep traffic moving and in order.

According to Duncan, the health department has received more than 4,000 requests for the vaccine from the community since mid-December. Because of this, Duncan said while the turnout was incredible, it was not terribly surprising to her.

“We were actually expecting this huge turnout because we have been so overwhelmed with phone calls here at the health department,” she said.

When patients finally made it to the parking lot of the fire department, they were ushered into the building through the garage, where they were screened for the virus and filled out paperwork.

Patients were then registered in the state system, CVMS, which stands for “COVID-19 Vaccine Management System.” The system helps track the vaccine rollout across the state and accounts for everyone who has received their first and second dose of the vaccine.

Next, patients received their first dose of the vaccine before being ushered to another room where they were given a timer to sit and wait for 15 minutes.

“The 15 minutes is to make sure that they aren’t having any serious, negative reactions to the vaccine,” Health Promotion Supervisor Jessica Farley said. “Those are state guidelines and that’s why we can’t just do a drive-up clinic because they need to be observed for that 15 minutes.”

Duncan said they plan to have similar pop-up clinics nearly every week until they have vaccinated everyone who qualifies and wants it.

Additionally, people who attended the clinic on Thursday will have to return for their second dose in a few weeks.

Altapass resident Ronnie Byrd, 77, and wife Sonya, 76, said they got in line for the clinic around 8 a.m. on the top of Burleson Hill near the Methodist Church. The couple received their vaccines around 10:45 a.m. but said they didn’t mind the wait at all.

“We’re just happy to be getting it,” Sonya Byrd said. “I think we must be the biggest age group in Mitchell County based on how many people are here...We’re just trying to put this COVID behind us and have a normal life.”

Ronnie Byrd said the vaccine was “better” than any other vaccine he had ever gotten.

“I just don’t want to get that COVID stuff,” he said.

Local resident Patsy Covington, 83, was also excited to have received her vaccine and emphasized the importance of it.

“I’m here getting the vaccine because I’m 83-years-old and I’m tired of all of this uncertainty of whether or not I’m going to get this virus,” she said. “I think it’s important everyone get it [the vaccine] when it’s their turn so they don’t get it and spread it to others.”

Mitchell county resident Katie Willett volunteered and was in charge of helping patients move from the parking lot into the fire department where they were screened and registered before receiving their vaccines. Willett said she felt it was important to help the community in such an essential process.

“Being a volunteer here today feels like a great way to be an encourager and support this endeavor,” she said. “I think to support this overall, as a healthcare worker on the frontlines, but also just as a community member helps show these people that we support them and everyone’s health.”

“I have to use this sanitizing gun at all of the rec games anyway, so I figured I’d put it to good use here too,” he said. “This is way bigger than I was expecting and I think it took everybody by surprise. It’s a good thing, though.”

While the pop-up clinic was a success, and there are more to come, the virus continues to persist in the tri-county region.

As of Sunday, Jan. 17, Mitchell County had 79 active positive cases of COVID-19 and 25 COVID-related deaths.

North Carolina has now broadened the requirements to receive the vaccination to all people aged 65 or older, so the health department scheduled two pop-up clinics for local citizens in the age group for this week. One was held on Wednesday, Jan. 20 and the other, scheduled for Thursday, Jan. 21 was canceled because the health department is currently out of vaccines. They said they will inform the public when they have another pop-up clinic scheduled.