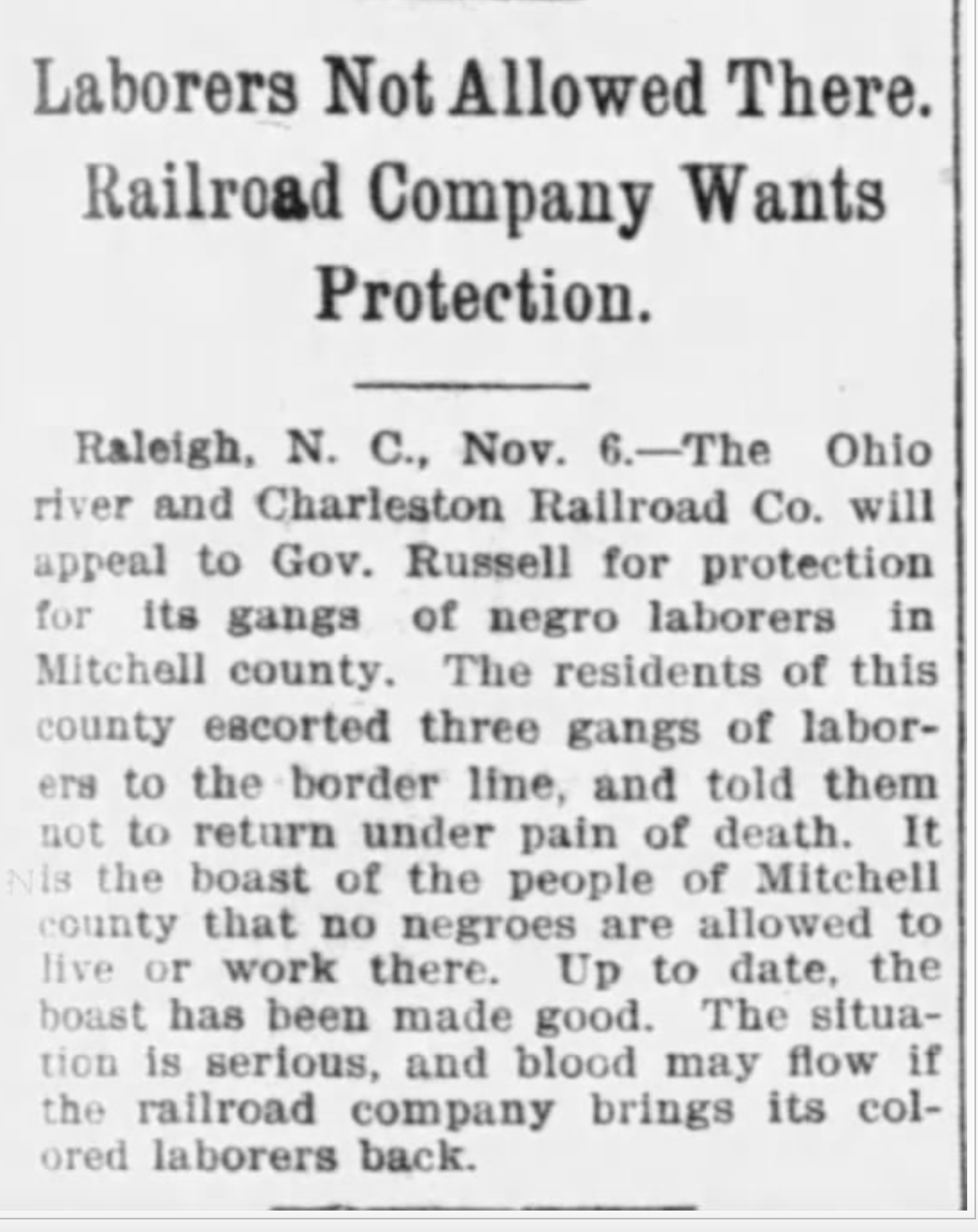 BAKERSVILLE — The Mitchell County Board of Commissioners denounced racism and other forms of discrimination while addressing an allegation of a possible racist policy at their regular session on Wednesday, Feb. 10.

Prior to the county attorney’s regular report, Chairman Matthew “Vern” Grindstaff informed the board he had received a concern last summer from a native citizen about a possible racist, discriminatory law the county had put into place more than a century ago.

“They had brought to my attention that Mitchell County, in years past, had possibly a law on the books called a sundown law,” Grindstaff said. “This is a law about race and about individuals being escorted out of the county if they were of a different race after dusk. So, I immediately brought this to the attention of the county manager and the county attorney and asked the attorney to do some research on this.”

Sundown laws allowed Black people, and other people of color, to pass through the area during the day to shop or work, but they had to be gone by nightfall. Anyone who broke this law could be arrested, beaten or worse.

During his regular report, County Attorney Lloyd Hise addressed the allegation and the history of racial discrimination in Mitchell County.

“There was a period of time in the early twentieth century where there was a lot of racial strife and violence and unfortunately some of that happened in Mitchell County,” Hise said. “There was a major incident in Spruce Pine in 1923 and there was another incident, I understand, in the north end of the county in about 1906 that did actually involve residents of the county actually running out Black citizens in this county.”

Hise recognized some places turned to sundown ordinances but said he could find no record of Mitchell County putting one into law.

“I was informed that this person believed the county has a sundown ordinance,” Hise said. “And I looked long and hard to find one, but I could not find one or find a record of one and I told him that. And, I do not recommend that y’all repeal the ordinance because I could not find that there was an ordinance.”

Hise said the person appeared to be offended by his response and said that was not his intention.

“He feels like, I think from me, it’s a slight and that we’re not going to deal with this, but it wasn’t,” Hise said. “I was just being honest. If we’re going to repeal something, there has to be something to repeal and I couldn’t find anything. It certainly was not to say that ‘we’re racist and we don’t intend to do anything about your request.’”

Commissioner Harley Masters questioned where this person got the information and said, “I would imagine that Wikipedia is not a reliable source of information.”

Hise said he did not know where the information came from and that he did not look at Wikipedia, but thought it was just an assumption based on racist events that had occurred in Mitchell County in the early twentieth century.

“I think there was an assumption that because of the incidents that we had had that there was an ordinance, implicitly or actually, and that it should be repealed, but I could not find anything in any of the minutes or the records of the county,” Hise said.

If not an assumption, the person may have found the information on the Mitchell County Wikipedia page, which states the county had a sundown policy in the late 1800s.

The Wikipedia Page reads, “By 1899, Mitchell County had a sundown town policy of preventing African Americans from living or working in the county.”

The website references a news-clipping from the Dayton Evening Herald out of Dayton, Ohio from Nov. 6, 1899, which reads:

“The Ohio River & Charleston Railroad Co. will appeal to Governor Russell for protection for its gangs of negro laborers in Mitchell county. The residents of this county escorted three gangs of laborers to the border line and told them not to return under pain of death. It is the boast of the people of Mitchell county that no negroes are allowed to live or work there. Up to date the boast has been made good. The situation is serious, and blood may flow if the railroad company brings its colored laborers back.”

While the clipping is odious, there is no specific reference to a sundown law having been put into place anywhere in the article nor has anyone been able to provide evidence that there was a specific law, according to Hise.

Hise said he does not believe that any commissioner, past or present, is racist and believes the county has done a good job in passing policies that are anti-discriminatory.

“I don’t think there’s a person on this board, or has been on this board that I can recall, that has any racist feelings whatsoever and I know our policies are replete with denunciation of any kind of discrimination on race,” Hise said. “It goes much further than race. It is race, gender, age, sexual orientation and gender preference. We go a long way in a lot of things in terms of how we try to deal with our fellow human beings.”

Grindstaff went on to say he believes Mitchell County is a welcoming place to all people.

“I think that Mitchell County is an extremely welcoming county for anyone and everyone that wants to live here and be a law abiding, profitable, contributing citizen to society,” Grindstaff said. “And I also believe that this board would echo those statements because I know all of y’all personally.

“I think it should be stated for the record and recorded in the record that I publicly denounce all forms of racism and discrimination and I think that Mitchell County as a whole would do the same.”

Grindstaff added while the citizens of Mitchell County cannot control people’s feelings and should not always condone them, they have a duty to live harmoniously.

“We cannot help some people’s feelings and there are certainly folks out there who do have feelings unlike our own, but I believe that one of the plagues of our society is that some choose not to respect other people’s personal feelings,” Grindstaff said. “And that applies in every way. We may not agree with someone’s personal feelings and we sometimes should not condone angry, bitter, mean or otherwise unprofitable feelings on people’s parts, but we do have an obligation to live harmoniously in society so that it does not negatively impact other people. I would encourage all Mitchell County citizens to do your part in doing just that.”

Commissioner Jeff Harding chimed in, as well, and said all people are created equally.

“What’s gone on in the United States of America here recently breaks my heart,” Harding said. “Because when we were born, when we were created, we were all created equal. God doesn’t care what color our skin is, or what we have, whether we’re rich, whether we’re poor, any of that.”

Harding also denounced racism and said everyone needs to look at themselves and do their part to make positive changes.

“Yes, I denounce racism,” he said. “I don’t think there’s any place for it anywhere. And I think if we all look at the big picture and we want to make the positives happen, then we all need to look in the mirror and see how we’re reacting to things.”