Dalton Dewayne Carden, 24, was wanted in connection to a Carter County drive-by shooting 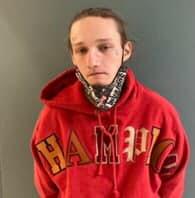 The PT Cruiser that Dalton Dewayne Carden and Danielle Shay Rhinehart drove during a chase that started in Carter County, TN and ended in Spruce Pine. Officers recovered a 12-gauge shotgun and a bulletproof vest from the vehicle in addition to drugs and paraphernalia. (Photo courtesy of Mitchell County Sheriff's Office)

SPRUCE PINE — Officers from the Mitchell County Sheriff’s Office, with help from the North Carolina Highway Patrol, on Tuesday, Dec. 22 stopped and arrested a Tennessee man and woman, one of which had a fugitive warrant from Tennessee for aggravated assault and reckless endangerment in connection to a drive-by shooting this past month in Carter County.

Dalton Dewayne Carden, 24, of Elizabethton, TN and Danielle Shay Rhinehart, 26, of Hampton, TN were both arrested following a vehicle chase that started in Carter County and ended in Spruce Pine.

Carden, who was driving the vehicle, was wanted in connection to a November Carter County drive-by shooting that claimed the life of a 10-year-old girl. In addition to being wanted for aggravated assault and reckless endangerment, he is also charged with felony fleeing to elude and possession of methamphetamine with intent to sell and deliver.

Carden, who is believed to have connections to a Tennessee gang, is being held on $60,000 bond.

Rhinehart, the passenger, was charged with possession of methamphetamine and possession with intent to sell and deliver and is being held on $30,000 secured bond.

Carden turned onto Highway 107 toward Mitchell County and the pursuit continued onto NC 226 in Mitchell.

English attempted a rolling roadblock to slow and stop Carden but he avoided it and continued to Bakersville where he then turned right onto NC 226 toward Spruce Pine.

Carden continued for approximately two miles before coming to a stop. The two suspects were then removed from the vehicle and taken into custody.

Captain Rick Wiseman said a 12-gauge pump shotgun, a bulletproof vest, methamphetamine, baggies and scales were recovered from the vehicle.

Wiseman said the paraphernalia suggests the two were involved in selling methamphetamine.

Wiseman said traffic was light during the duration of the pursuit and speeds never exceeded 65 miles per hour. He thanked the North Carolina Highway Patrol for their efforts to assist.