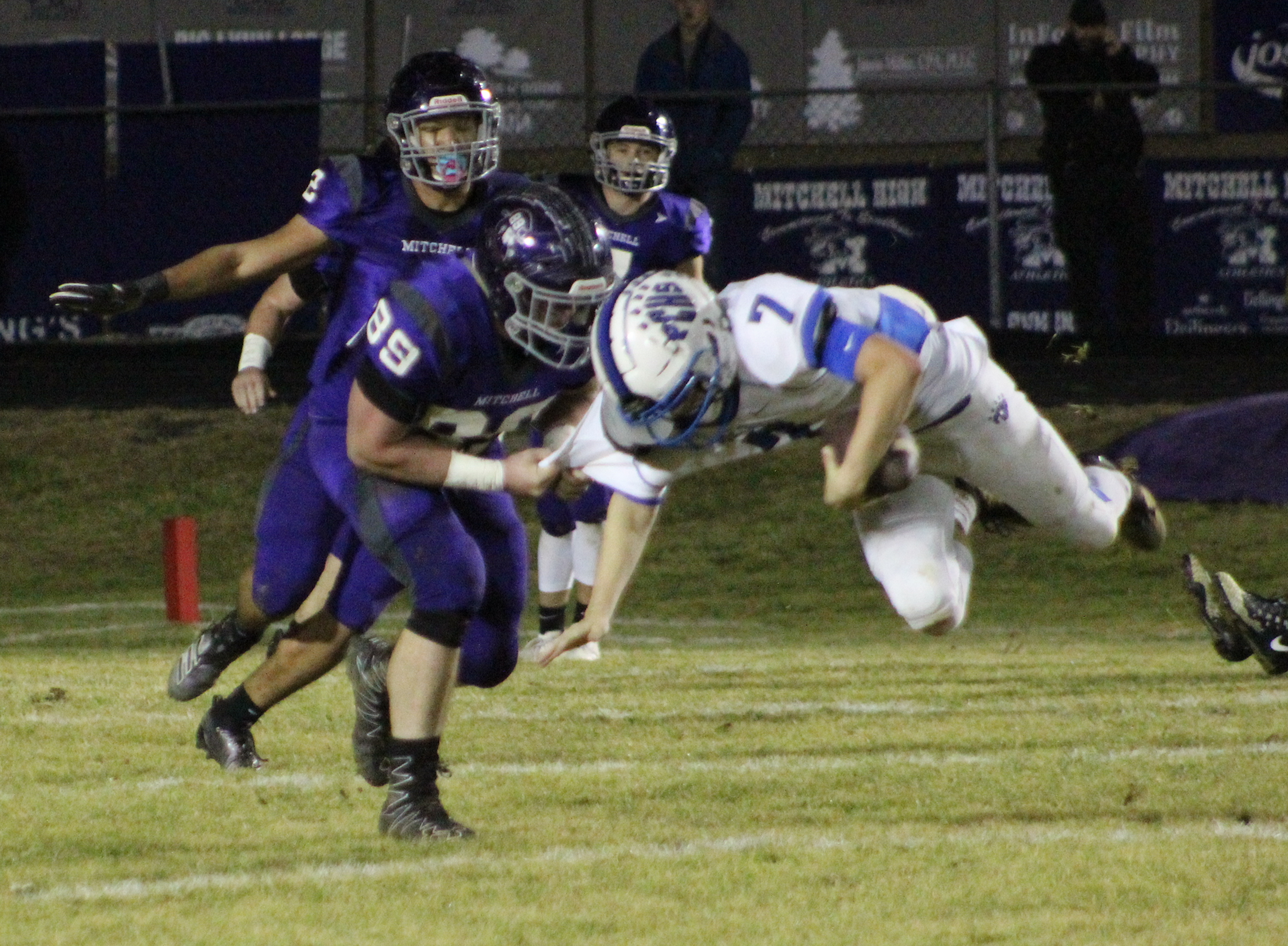 LEDGER – Mitchell High School’s varsity football team is moving on to the next round of the 1AA state playoffs.

Mitchell will now host a third-round game against No. 6-seeded Swain County (11-2), which knocked off No. 3-seeded Bessemer City 38-12 on the road in the second round.

Senior quarterback Noah Pitman got the Mountaineers going early, staking the home team to a 7-0 lead after finishing off Mitchell’s first drive with a 32-yard rushing touchdown.

On the ensuing Polk possession, the Wolverines marched into Mitchell territory but missed a 39-yard field goal.

“They had a few wrinkles we hadn’t seen,” Travise Pitman said. “Anytime you show kids something they haven’t seen, it’s going to take some time to adjust. These kids understand football and how to adjust.”

And adjust the Mountaineers did.

Mitchell’s next drive ended with a 1-yard rushing touchdown as Noah Pitman bulldozed his way into the end zone to cap off an eight-play, 80-yard drive.

The Mitchell defense stiffened and forced a punt on the ensuing Polk possession and then pushed its lead to 21-0 with less than a minute remaining before halftime on a rushing touchdown from junior Tanner Duncan.

Noah Pitman connected with senior Logan Hudgins for an 18-yard score in the third period to put the Mountaineers up 28-0.

Noah Pitman racked up 206 passing yards with a touchdown and scrambled for 81 yards and a pair of scores.

Mitchell will now prepare for its third-round duel against Swain, which enters the game with a four-game winning streak and a pair of double-digit playoff wins under its belt.

The Maroon Devils lost back-to-back games in October – 15-14 to Murphy and 43-6 at Robbinsville – but responded with its current four-game winning streak during which the team has won by double digits, scored at least 38 points held opponents to 12 or fewer points three times.

Swain started its playoff run with a bang by blasting visiting Union Academy 47-10 and followed with its second-round win at Bessemer City. The Maroon Devils blitzed Bessemer City early, jumping out to a 12-0 lead after one quarter. Swain added 13 points in the second half to take a commanding 25-0 lead into halftime.

“They’re on the rise this year,” Travise Pitman said about Swain. “They’re a good football team.”

Swain’s offense is run-heavy, with the Maroon Devils averaging more than 250 yards per game on the ground compared to 75 yards through the air.

Swain’s featured running back, junior Damian Lossiah, is averaging more than six yards per carry this season and is searching for his 20th rushing touchdown of the campaign.

Swain’s other regular running backs – junior Bryce Sain, senior Ian Brooks and sophomore Carson Taylor – are all averaging more than five yards per carry and have combined for 27 touchdowns.

The Maroon Devils’ defense generally keeps things close. Swain has given up an average of 13.2 points per game this season and has posted three shutouts, including back-to-back shutouts of Franklin and Cherokee in September.

“We all know what Swain is,” Travise Pitman said. “This is the time of year that you have to just play football. This is win or go home. This is when you have to lay it all on the line.”

Kickoff is 7:30 p.m. Friday, Nov. 29, in Ledger. The winner will advance to the regional championship round and face the winner of the game between No. 1-seeded East Surry and No. 5-seeded Mountain Island Charter.

As the top seed in the west, if East Surry advances, either Mitchell or Swain would be on the road for the Friday, Dec. 6, matchup.